The Luggie has always been a popular range of mobility scooters, known for being portable, collapsible and great to travel with. The Luggie Super is a member of this family of portable mobility scooters and includes a number of features that makes it a versatile and popular choice.

What is the Luggie Super?

The Luggie Super is a portable mobility scooter that features a wider and deeper seat than its counterparts. It also has extra legroom, wider handlebars, a more powerful motor, LED battery indicator and armrests.

One of the shortcomings of many portable mobility scooters is that they usually have a smaller weight-bearing capacity. This is where the Luggie Super shines, with a 163kg capacity.

The Luggie super also has the same wonderful folding ability as the others in the range, making it perfect for travel and portability. 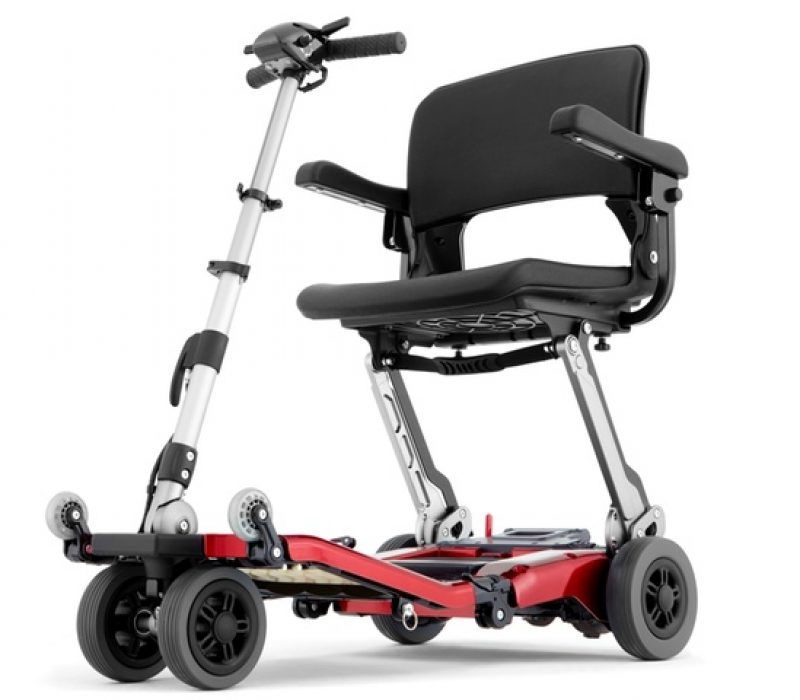 Peter Healy of Dayboro purchased his Luggie Super from Scooters Australia Brisbane. Over the time he’s owned it, it’s made plenty of long journeys.

Margaret, Peter’s wife, says the Super has come with them on plane trips to Canberra and Cairns. At the National Library, some fellow tourists were so impressed with the little Luggie that they asked for a folding demonstration!

Margaret says the Super was a great purchase because it’s larger than other folding scooters but still small enough to be practical.

It had to be small enough to fit into the boot of a car. It folds nicely and packs away in about a minute.

Peter now uses it everywhere he goes, including the supermarket and the local shopping centre.

Peter and Margaret had never bought from Scooters Australia Brisbane until last year but they say they were very happy with the service we provided.

Aside from the classic Luggie Super, there are a few other versions available on the market. Each comes with a different range of features to suit a wide number of different needs.

This makes the scooter more suitable for rough terrain, allowing for a smoother drive across bumpy surfaces. 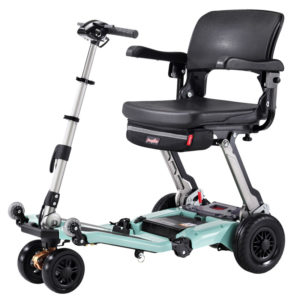 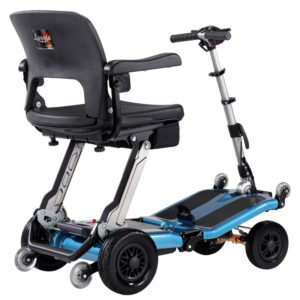 The Super Deluxe is the wide track version of the Luggie Super Plus and is the top-of-the-range heavy-duty portable scooter. It’s perfect for people who want a portable scooter that can still handle rougher terrain and have a larger weight capacity.

Like the Super Plus, the Super Deluxe it also features front wheel suspension and larger pneumatic tyres.

If you’re looking to buy your first scooter or simply need a different model, the Luggie Super is a practical option that offers great value for money. Get in touch with us today on 1300 884 880 to explore which model is best for you.

Can I Take My Scooter on the Train or the CityCat?

For many mobility scooter users, getting around on public transport is a must. If you…

Luggie Elite ideal for getting out of the house

We've already looked at the Luggie Standard and Super, but today we're putting the spotlight…

Come Fly with Me and the Luggie Standard

People rely on their scooters for different reasons. Phillip Cole of Chapel Hill uses his…

“Denis was very helpful and patient with me, very happy with my Monarch Buzz 4 scooter, it has given me more freedom.”

“You were very patient in explaining things … and even … bringing two scooters to our house for him to test drive in our area. I appreciate your honesty and the fact that you were, in no way pushy, you made us both feel very comfortable.”

“Thank you for the fantastic service provided by Scooters Australia when I purchased my portable Buzz scooter.”

“The Luggie has made an incredible change in my life, I can go shopping with my husband and kids and it has made me a lot more independent, even though it already has battle marks it’s been the best thing to happen to me and again thank you.”

“Scooters Australia are very prompt, flexible, friendly & knowledgeable. Buy your scooter from them & you won’t regret it.”

“I would just like to thank John and Denis from Scooters Australia for the help and assistance they provided when I recently purchased my mobility scooter. I am very happy and cannot recommend them enough.”

“This was the second time I have purchased a scooter from your company. I find your website to be very professional and easy to navigate, and I think your prices are extremely competitive. My Monarch Tesla scooter is fantastic.”

“Having personal difficulty in walking distances, I recently purchased a ‘Luggie”. With it I have travelled around the world. The scooter was a wonderful assistance making the journey possible for me.”

“After ringing about 5 different companies, I finally found a company that listened and provided the assistance I needed.  You really know your stuff and I will be calling your company again when I need my scooter serviced next. ”

Stay up to date with the latest news, sales and offers.

Sign up now for the Live Without Limits! newsletter to receive useful advice and information about mobility equipment.

By signing up, you agree to Scooters Australia Brisbane sending you email from time to time about your enquiry and other services. You can unsubscribe at any time.